Some years ago, we published a paper about professional stress in anaesthesiology (1). We described things well-known by any professional. Anaesthesia is a service profession 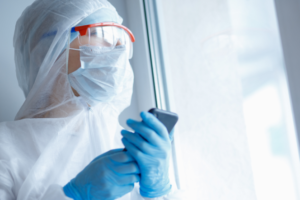 which demands the physician to be able to work in a team and to act accordingly. Frictions between team members are not unusual in the OR, and this atmosphere could lead to tension and conflicts.

As in obstetrics, the anaesthesiologist sometimes takes care of “healthy patients” and is responsible for more than one patient at the same time (e.g. mother and child). And contrary to almost any medical field, the anaesthesiologist is still obliged, in spite of the last technological innovations, to use a lot of “blind” methods in his/her daily practice, such as in cases of very difficult tracheal intubation, the performance of regional anaesthesia or catheterisation of veins or arteries.

Fatigue was also included in the list of the factors responsible for the stressful situation in which the anaesthesiologist is supposed to act on a daily basis.

But in that paper, we did not discuss the effect of long sleepless nights when the anaesthesiologist is on duty and ready to answer to any call, anytime, sometimes 24 hours in a row, and even more.

By that time, we had not found any study discussing this aspect of our speciality.

But recently, Valente F et al. (2) published a cross-sectional study regarding the quality of sleep of Portuguese anaesthesiologists. The results showed that anaesthesiologists, which are a high-risk group due to work shifts and early start at work, suffered a poor quality of sleep, excessive daytime somnolence, high perceived stress and a high rate of use of sedatives. Valente identified that 20.7% of the participants took sleep medication at least once a week.  In 87.3%  of those using sleep medication, benzodiazepines were the medicine of choice.

In a relatively recent editorial in this Newsletter (3), I wrote:” But as far as I know, in most countries of our continent and most of our hospitals young anaesthesiologists work in 24-hour shifts, and in many cases they are obliged to stay in the hospital extra hours after the night shift, mostly for transferring the patients to the morning staff. One may say that, in the current reality, this is the “normal” situation, and most of our younger colleagues already got accustomed with the system, many of them dreaming of becoming specialists and thus being obliged to cover fewer hours in the hospital”.

So, the question is, why could the average anaesthesiologist perform during the long hours of night duty when sleep could be interrupted anytime, for just a couple of minutes or (too often!) for hours?

During my own residency, I found out that I was blessed by nature and could fall asleep very soon after coming back to my room from the operating theatre or intensive care unit. So I was able to answer anytime on the next call.

At that time, I was not aware of what today the pertinent literature calls the power nap (4). Now we know what it is about. A power nap is a short sleep that terminates before deep sleep, and its effect is quickly revitalising the sleeper.

We are speaking about a short ‘sleep’ of 20 minutes (or even less), which increases alertness and motor skills. Brooks et al. (5) found out on 24 healthy young adults that a 20-minute nap was associated with improving emerging 35 minutes after napping and maintained for as long as 155 minutes. Lahl et al. (6) studied the effect of a 6 minute-nap and reported that in comparison to the no-napping group, word recall was significantly much better, a result which implies that even ultrashort periods of sleep could be sufficient to enhance memory processing.

Finally, a paper by Arora et al. (7) described the effects of on-duty napping on 38 internal medicine residents’ sleep time and fatigue. The residents reported less overall fatigue while on the nap schedule than on the standard schedule (p=0.017).

A very interesting proposal is combining a short nap with caffeine!

Caffeine in coffee takes up to half an hour to have an alerting effect; hence a short (15-20 minutes) nap will not be compromised if it is taken immediately after the coffee. Some people even call it “a double shot of energy”.

Is that possible? In other words, is there any chance that during a long night duty, a short pause is arranged, an hour or so, during which the physician be replaced in the operating room, he/she will take a cup of strong coffee and immediately put his/her head on a pillow trying to take a nap for no more than 20 minutes?

This idea has many facets. First of all, is a manpower shortage in almost every anaesthesia department all over our continent. In practice, too often it would be difficult, or rather impossible, to find during the night shift a colleague who is available to replace, even for 30 minutes, a physician who is providing anaesthesia for hours and give him/her a chance to use the power nap system, with or without the proposed coffee.

But one much more difficult question to answer is the problem related to what is called the handover system, e.g. passing the responsibility for the anaesthetised patient to another colleague for a short time.

Some recent studies showed that even incomplete handover of intraoperative anaesthesia care was associated with worse outcomes, including increased mortality and major complications in the first weeks after surgery.

For instance, Saager et al. (8) reported that each anaesthetic handover increased the risk of major in-hospital mortality by 8%, and the results are virtually identical for residents and certified registered nurse anaesthetists.

Jones et al., in 2018 (9) wrote: “Among adults undergoing major surgery, complete handover of intraoperative anesthesia care compared with no handover was associated with a higher risk of adverse postoperative outcomes”.

Dutton et al. (10) reported that longer cases were more apt to be associated with adverse outcomes if the patient care included periods of handover.

The explanations for these negative results regarding the handover during anaesthesia include insufficient information passing from one professional to another, the incomplete understanding situation of the patient by the physician who would take over the case, and also the simple fact that in most cases which handover is performed the surgical procedures are very long, complicated, and this by itself could contribute to the increase in postoperative complications.

True, some studies reached different conclusions. For instance, Meersh et al. (11) found no significant difference between outcomes in anaesthetised patients who received handover compared to the no handover group regarding primary outcomes of mortality, readmission, and serious postoperative complications.

Nevertheless, the topic of the handover during anaesthesia could be an impediment in the process of including the power nap as a method to reduce the anaesthesiologist fatigue and to increase his/her ability to take better care of the anaesthetised patient.

But improving the communication between the professionals could reduce the negative impact of handover. As Bertrand et al. reported (12), positive communication behaviour may decrease the stress response and improve clinical performance.

Spending more time during the process of passing information could improve the process of taking over. More than this, the “replacer” can uncover mistakes or errors which a tired anaesthesiologist could overlook.

Finally, each of us is supposed to be aware of the moment of fatigue, accompanied by a decrease of the vigilance at the head of the anaesthetised patient, and ask for a short handover.

In my opinion, the power nap should be used as often as possible. This process is necessary for all of us since “anaesthesia is not safe in and of itself. It is our presence that makes anaesthesia safe” (13).

Kean Seng
Totally agree with the power nap during night shift. Just one personal preference for my own practice. If i am the responsible anaesthetist for complex case at night, i tend NOT to handover to colleague for nap if possible (except a 5-10mins toilet break), unless i am extremely fatigue that i feel will affect my judgment or skills. I would prefer to finish the case myself. First because i don't find myself able to rest peacefully while the back of my mind knowing that the case is still on-going. Second because what was mentioned by Prof Gabriel that, each handover increases mortality by small percentage. Apart from coffee, i find it by drinking plenty of water and a light meal instead of 'high calorie fatty meal' during my shift actually keep my mind and body going better at night. Just sharing.
14 days ago
gabriel gurman
To Ricardo: The idea is not to see the nap power as the solution for the lack of manpower and overwork. The idea is that even if one covers only one night per week, it is important to take care of having a possibility to put the head on a pillow for 20-30 minutes. To Ramos: Totally agree. During my long career, I covered not more and not less than some 1,500 nights on call in the hospital, and I know from my own experience that a short nap could help in order to go on and fulfill your tasks. Gabriel M. Gurman, MD Chief editor
18 days ago
Riccardo
So instead of working lighter and shorter shifts, we should force ourselves to take naps and drink coffee. Kind of like soldiers on the front taking drugs to stay awake. Not the healthiest suggestion maybe. It would be more interesting to study the association between long shifts and morbidity -including car accidents-. Just my opinion.
21 days ago
Marcelo Sperandio Ramos
I never read the cited literature about the power of short naps on our attention and performance, but I always KNEW and often used it. We need no academic literature to demonstrate the obvious restoring power of even a short nap. This is even more pronounced in the daytime (after lunch or mid-afternoon).
21 days ago