> News > Newsletter May 2022: Editorial – The anaesthesiologist at the frontline
Been read
498
Replies 3

The Ukrainian tragedy of the last weeks, the increasing number of soldiers and civilians wounded or killed, the destruction of thousands of houses, schools, hospitals and any other normal facilities of human existence brought to my memory scenes from those wars in which I took part as a medical officer.

I remember those days in which I had to take care of renewing disposable medical equipment and drugs, and also those nights during which I had to carry wounded soldiers, trying to stabilise their homeostasis, and bring them to a helicopter which was supposed to safely transport them to a rear hospital.

Many years ago, during one of the military operations I took part in, I ran a field hospital, which offered all the necessary facilities (including operating rooms, blood bank, laboratories and recovery rooms), and remembered so many cases for which I could not be of any help. But I was also present and active in treating soldiers wounded during a war of attrition.

As a former military officer, my thoughts go today to those Ukrainian colleagues and friends who suddenly, from one day to another, became obliged to face a tremendous challenge, trying to help when the work conditions could be far less than optimal. 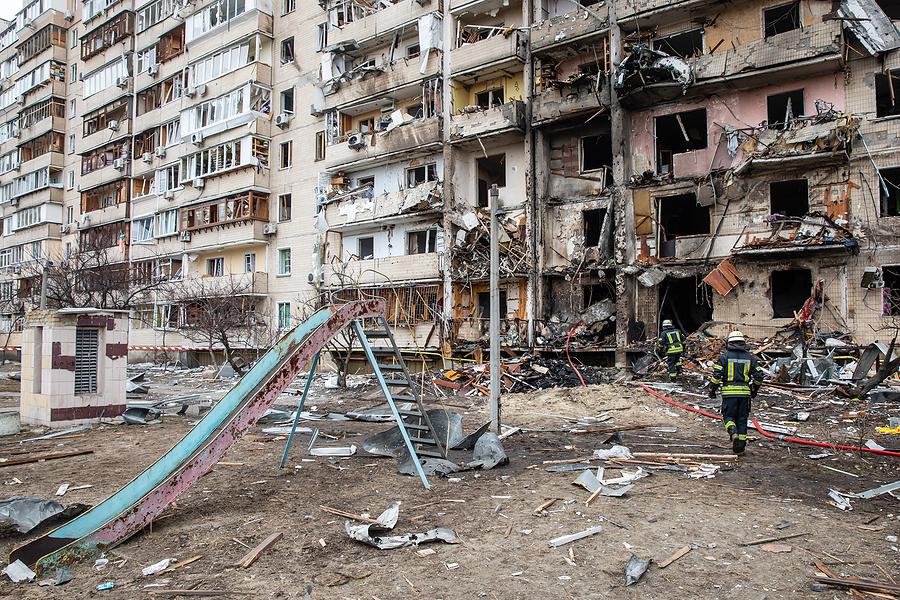 In this battle in assisting the wounded, the anaesthesiologist is placed on the front line.

Please, do not look for published reports regarding the role of the anaesthesiologist on the battlefield, you will find almost nothing.

And do not think that fighting COVID 19, or any other pandemic catastrophe has any similarity with what happens when one has to save human lives under missile bombardment.

In a chapter of a book on disaster (civilian and military) medicine, published more than 30 years ago (1) I wrote: “the role played by the anesthesiology team in the field is a critical one in dealing with emergencies, in triage, in making surgery as safe as possible, in the intensive care of the critically ill (preoperatively and postoperatively), and in the relief of acute and chronic pain”.

In the recent past, I wrote about the position of the anaesthesiologist in the operating room and called him/her “backstage director” (2), meaning that his/her activity lacks exposure to the general public, a similar role to that of the show director in a theatre.

But the situation is completely different during war.

In war, the anaesthesiologist is the person in charge of everything connected to medical aid, he/she is visible and their activity is needed 24 hours a day.

The anaesthesiologist is supposed not only to offer specialised first aid, and assure the transport of the wounded to the first medical facility, but also to cover the main organising functions behind the battle line.

The logistic difficulties are sometimes insurmountable.

I am not speaking only about work conditions under continuous fights. It would be difficult to put in words that special feeling created by a combination between the obligation to take care of others and the permanent fear for your own life.

But I would like to mention some of the problems which are a compulsory part of the job description in war.

The first which comes to my mind is the paucity of manpower. In war, rear hospitals are supposed to go on fully working day and night, covering the treatment of all emergency cases, those which usually are part of the daily activity, but also the multitude of wounded civilians, mainly children and old people, who could not always find a way to a shelter and who are permanently exposed to attacks coming from the sky.

But many anaesthesiologists are taken to the front line, covering the care of wounded soldiers.

The art of adaptation to a new situation and the need for improvisation is part of our profession in times of war.

One example would be enough: the task of supervising more than one anaesthetised patient per unit of time. Don’t forget: most of those patients are in an unstable condition, as a result of multiple wounds, shock, acute respiratory problems, etc. So, ingenious solutions are to be found in place, and nurses and physicians from other specialities are to be instructed and trained on the spot, hoping for the best.

The other day I heard about a southern Ukrainian town completely isolated from the rest of the country, and I wondered how can a hospital in that city work in the absence of all those disposable materials needed for taking care of all the patients and the wounded? I can imagine how difficult is for an anaesthesiologist there to respect the rules of sterility, alleviate pain, or prevent wound infection when everything is lacking.

The triage of seriously wounded is also part of the anaesthesiologist’s task.

I vividly remember a lecture offered by one of the most experienced anaesthesiologists, who took part in some of the military operations in my region. One of his questions to the audience was this one: the evacuation helicopter has only one place left, and you have two wounded soldiers, one with a very severe head injury, comatose and in need of artificial ventilation and the other one with a penetrating abdominal wound, getting i-v fluids for replacing the blood loss. To whom you would give priority? I also remembered the numerous questions and comments coming from the public when that lecturer’s “verdict” was to give the place to the soldier with the abdominal wound.

And what about a decision to stop the resuscitation manoeuvres for a young, otherwise healthy but injured soldier who, according to everything you know and everything written in textbooks, is beyond any chance of survival?

But this is the sad reality. It includes the need to take painful decisions, and try to solve ethical problems, because during the war, too, one is supposed to use clinical judgement and sometimes give priority not to the most severe patient but to that one who has more chance to stay alive.

Last but not least, the anaesthesiologist is also a human being. He left at home family, children, and parents. In a war like that one in Ukraine today nobody can be sure that they would survive the next bombardment. Our Ukrainian colleagues are called to cover the emergency needs on the front, but their thoughts must go to those left at home, and one can easily understand the stress produced by the permanent worry and fear.

The war in Ukraine started at the end of February this year. I am writing this paper in the second week of April, and for the time being there is no sign that the hostilities will stop in the near future.

I hope that these thoughts for our Ukrainian friends will help them through this terrible period.

But I would like them to know that we worry about them, their families and about their country.

I am sure that our readers will join me in wishing our Ukrainian colleagues a quick end to this war and a rapid return to normal life and activity.

This Newsletter is open to letters signed and sent by our members, as a sign of solidarity with those who work these days under stress and permanent danger.

gabriel gurman
For Sergiy: indeed there is no chance to get understanding from indoctrinated people, but be sure Sergiy, that the free world is with you. I wish you a quick stop of the war and a rapid return to the normal life. GG
3 months ago
Prof. Sergiy Vorotyntsev
Dear Gabi, many thanks for your describing and supporting letter for ukrainian anaesthesiologists who works now with victims of this terrible war! Of course, professional military knowledge and skills are very important for good job, but stressful life is more destroit for human. For real humans! Not for russian anaesthesiologists who support this war (according prof. Lebedinsky letter in facebook - more than 50%)!!! It's really incredible!! Why it happens? Maiby anaesthesiologists can change their mind under pressure of war (or terrorists)? Good topic for discussion!
3 months ago
Dr Emmanuel BOSELLI
It is so sad to see what happens and to feel so powerless. May this message at leat bring some comfort. I am not Ukrainian but I support you, even if I don’t know how.
3 months ago