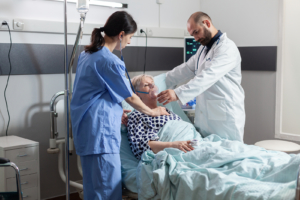 We encountered an interesting case of a 52 year-old lady with underlying ‘Stiff Person Syndrome’ (SPS) scheduled for day-care upper gastrointestinal scope and colonoscopy. She was diagnosed with SPS in 2018 with Hashimoto Thyroiditis and chronic headache. She is taking Baclofen, Myonal, Paracetamol and Celebrex for her SPS and Euthyroxin for hypothyroidism. Her manifestation of SPS was usually painful spasticity of limbs triggered by anxiety and pain.

We successfully managed her case with monitored sedation throughout the procedure. The approach mainly focused on ensuring adequate depth of sedation and avoiding her triggering factors (anxiety and pain). She was given a local anaesthesia spray prior to cannulation in a calm, quiet induction room. Premedication Midazolam 2mg was given prior to the procedure. We maintained her sedation with target-controlled infusion (TCI) propofol at 1.5mcg/ml. Abolus of fentanyl 25mcg was given before the surgeon proceeded with colonoscopy. She went through both upper and lower GI scopes without any spasm or rigidity. She remained well, pain-free and asymptomatic in the recovery bay and she was discharged home the same day.

SPS, sometimes known by the name Stiff man Syndrome (SMS) was first described by Moersch & Woltman in a case report in 1956. It is a rare autoimmune neurological syndrome manifested by fluctuating rigidity and painful spasm of axial or limb muscle¹. The mechanism of the stiffness remains unknown but is likely autoimmune driven due to the presence of antibodies against glutamic acid decarboxylase (rate-limiting enzyme for the synthesis of GABA) in cerebrospinal fluid. GABA has inhibitory input to muscle producing relaxation effects. The imbalance caused by low GABA from autoimmune will eventually lead to continual motor activation and muscle spasm. During an exacerbation, the presentation can be easily mistaken as a seizure or anxiety attack (reported in previous case reports). Prolonged hypotonia or weakness post-operation can also be mistaken for acetylcholinesterase deficiency if suxamethonium was used during anaesthesia. Successful treatment of this condition has been directed at the enhancement of GABA-ergic neurotransmission, mainly Baclofen at doses from 20-200mg per day ², steroids or immunosuppressive drugs.

As uncommon as it seems to be but when it comes to the time of anaesthesia, the ‘dos’ and the ‘don’ts’ during anaesthesia have a direct relation to patient outcome. Only very limited case reports can be found in the literature regarding anaesthetic management of SPS patients. Anaesthesiologists will face two spectrums of challenges from SPS patients with either risk of muscle spasm versus prolonged weakness.

Muscle relaxant: The administration of muscle relaxant and a volatile agent has been previously known to cause prolonged hypotonia in SPS patients. Johnson & Miller first reported that their patient had prolonged hypotonia with vecuronium use which lead to 48 hours of ventilation despite the adequate reversal of muscle relaxantᶟ. Five months later with the same procedure, they did not encounter any complications after avoidance of muscle relaxantᶟ. This effect was not reported by Haslam & Price with the use of atracurium in their patient for two separate occasions⁴. The antibodies responsible for SPS have no effect on the neuromuscular junction therefore muscle relaxants should not cause post-op weakness. This was objectively assessed by Obara et al. with train of four ratio (TOF) in an SPS patient. When the neuromuscular monitor was used during the case, it demonstrates recovery of the train of four ratio (TOF) to 100% post-operation, suggesting that muscle relaxation has no effects in SPS patient⁵. Yamamoto further consolidated this finding by assessing neuromuscular junction in the absence of muscle relaxant, which found no effect as well⁶. However, interpretation of TOF itself can be difficult if used in patients with abnormal muscle tone. If muscle relaxant is necessary during anaesthesia, it is more suitable to use those that can be fully reversed by Sugammadex such as Vecuronium/Rocuronium.

Volatile agent: Bouw et al. later attributed the observation made by Johnson & Miller due to the effects of a volatile agent with Baclofen treatment in an SPS patient. The majority of patients are taking Baclofen as treatment pre-operatively and if a volatile agent was used during anaesthesia, the presence of Baclofen will amplify the GABA (b)-ergic effects of volatile. Bouw claimed that their patient who was on Baclofen pre-operatively had prolonged ventilation for 1 hour with 0.6-1% of Isoflurane use⁷. This relation between volatile agent and baclofen can be dose-related because in one case report by Qin et al who used a lower concentration of Isoflurane (0.2-0.4%) along with nitrous oxide and remifentanyl infusion, they found no complications in their patient⁸.

Several case reports have been published on the successful management of SPS patients in surgery without the complication of flare-ups. Yamamoto K et al combined general and epidural anaesthesia for their patient who had undergone thymectomy⁶. The use of epidural is beneficial for superior pain management and reduced the impact of anaesthesia with GABAergic action.

If general anaesthesia is required for surgery, total intravenous anaesthesia (TIVA) is superior to conventional volatile agent plus muscle relaxant because there have been case reports demonstrating a  good outcome⁹.

Spinal and regional anaesthesia is advocated to be the best choice if deemed appropriate for the nature of surgery. Nabil et al. performed a paravertebral block with conscious sedation for their SPS patient undergone inguinal hernia repair successfully¹⁰. However, this method can be tricky and challenging due to the risk of spasms induced by pain during needle entry, or patient anxiety from situation awareness. Therefore, one must pay attention to non-pharmacological management in SPS patients including reassurance, ensuring a calm environment, avoiding sudden loud auditory stimulation, and good pain and anxiety management for the patient.

Kean Seng
To be honest, i never heard of this syndrome too. That caught my interest and curiosity in searching for similar articles in the literature. I have compiled all the published articles in a table form with patient's background, mode of anaesthesia and outcomes. I can email it to you if you are interested. Best wishes.
20 days ago
TimCL
Everyday is a school day, Thank you Kean. I wasn't aware of SPS before reading this article. Although as mentioned that muscle relaxant unlikely to cause hypotonia but in my opinion I will still try to avoid using relaxant if possible. TIVA and regional likely to be the solution for this group of patients.
29 days ago