On June 8th, 2021, the long-time director of the Department of Anaesthesiology and my esteemed predecessor, Univ.-Prof. Dr Dr. h.c. Wolfgang Dick died at the age of 84. 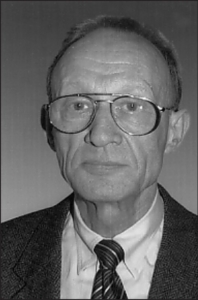 Professor Dick was born in Wesel, Germany in 1936 and passed the medical state examination and doctorate after studying medicine at the University of Cologne. After acquiring his license to practice medicine in 1965, he was trained as a specialist in anaesthesiology at the Universities of Mainz and Los Angeles and he completed his professorial thesis in 1970 in Mainz. In 1972 he moved to Ulm University as Head of Department II at the Department of Anaesthesiology, where he worked alongside his colleague and friend Professor Friedrich Wilhelm Ahnefeld.

Between 1973 and 1977 Prof. Dick acted as dean of the clinical-medical faculty of the University of Ulm and also represented the university hospital as its medical director. In 1982, with the tragic death of Rudolf Frey, Professor Dick was recalled to Mainz and appointed full professor of anaesthesiology at our university. Until his retirement in 2004, he worked here with the highest academic and clinical competence, disciplined, strict and kind at the same time, visionary and always committed to the further development of our speciality as well as the department.

With my appointment, I was allowed to take over a department that was one of the leading university institutions in Germany in terms of both the breadth of the spectrum and excellent academic and clinical performance. In particular, I could feel Wolfgang Dick’s signature, which stood for consistent, educated, well-read and reliable medicine and was unmistakably committed to the interests of the patient. While the quality management movement was still at the beginning of its development, Prof. Dick had long since firmly established and cultivated aspects such as process and structural quality as well as patient safety at his department. As a member of a circle of elite “academicians”, Prof. Dick counts as one of the founding fathers of the European Academy of Anaesthesiology, which he chaired as Honorary Secretary and later as President. With the political and social opening of Eastern Europe, the Academy functioned as an elementary level to establish uniform training at a high level and to unite European anaesthesiology.

Prof. Dick represented our university hospital as medical director and he acted as chairman of the European Resuscitation Council. In addition, Professor Dick represented the German Interdisciplinary Association for Intensive Care and Emergency Medicine as its President. Professor Dick is a Fellow of the Royal College of Anaesthetists, held an honorary doctorate from the University of Poznan in Poland and has received the Medal of Honor from the German Society for Anesthesia and Intensive Care Medicine.

Behind this personality of the highest national and international renown hides a reserved personality, humorous and of natural authority, who stood for reliability, diligence and honesty, a real gentleman.

Everyone who met Professor Dick, was trained by him, worked with him, orientated themselves on him and who had the honour to understand his attitude towards academic anaesthesiology, will miss him. Lost but not forgotten! Goodbye Prof. Dick and thank you very much.

The Chief Editor Note: Prof. Wolfgang Dick, one of the European Academy of Anaesthesia founders and a leading professional in our continent, was a good friend of mine. I used to meet him at the various congresses and meetings organised under the auspices of the European anaesthesia organisations. He was a physician but also a recognised successful teacher and leader in our field. OurEuropean anaesthesia community will miss him immensely.