Doctors from France and Armenia gave details of a 58-year-old woman who suffered unexplained severe finger pain for more than 40 years when knitting, in a case report presented at this year’s Euroanaesthesia.

The woman, whose pain was also triggered by cold weather, was revealed to have a rare benign tumour under her fingernail.  The tumour was successfully removed.

The patient, who was right-handed, attended the pain clinic at the Wigmore Clinic, Yerevan, Armenia in October 2021 with severe shooting/burning pain in her right index finger, which was triggered by knitting. 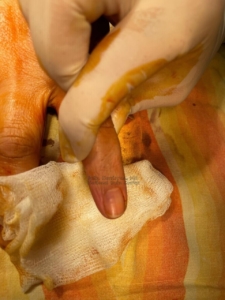 The finger pain, which was accompanied by pins and needles in her right lower arm and shoulder, also appeared during cold weather.

The woman, who had no history of a finger injury, had had this pattern of symptoms for more than 40 years.

She had seen several different specialists and been treated unsuccessfully for other conditions including Reynaud’s disease and neuroma.

The woman, who was from Armenia, was examined at the Wigmore Clinic by a multidisciplinary collaborative French-Armenian team, organised by the Hospices Civils de Lyon, the second largest French university hospital.  The Hospices Civils de Lyon is one of three French university hospitals providing medical training in Armenia as part of a medical programme set up by the French government following the 2020 Artsakh war.

A physical examination revealed that putting pressure on her nail, stroking the edge of her nail, applying ice to her hand and holding her hand downwards all produced the same pattern of pain as knitting.

Tests showed she had normal levels of pain sensitivity.

A small section of the nail on her right index finger was slightly bulbous, darker than the surrounding nail and faintly purple.

This deformity, in combination with a slight scalloping of the surface of the bone under the nail (revealed by X-ray) and a small, dense mass with no blood vessels inside, along with an adjacent bone defect (both revealed by ultrasound), suggested the patient had a glomus tumour.

The majority (75%) are found under a fingernail or toenail.  They can develop in any part of the body, however, and have been found on the penis and inside the stomach. Normally benign, they can in rare cases, become malignant and spread to multiple sites throughout the body.

Examination of the growth under the woman’s nail, after removal in a 30-minute operation in late October 2021, confirmed it to be a benign glomus tumour, 5mm in size.

The operation took place in the Hand Surgery Department of the National Burn Centre in Yerevan and was performed by an Armenian team.

“Glomus tumours are uncommon and while hand and plastic surgeons are familiar with them, they may present a puzzle for other specialists,” says pain specialist and anaesthesiologist Dr Mikhail Dziadzko, of the Department of Anaesthesiology & Pain Medicine, Hopital de la Croix Rousse, Lyon, who was part of the French-Armenian multi-disciplinary team.

“This patient had a 5mm tumour which had been growing slowly for more than 40 years. Her quality of life was affected not only by painful sensations during particular gestures and cold weather, but also by constant anticipation of the pain and frustration over the inability to solve the problem over the decades.”

“A surgeon was able to remove the tumour in 30-minute procedure using local anaesthesia. No particular care was required after surgery, other than standard painkillers such as paracetamol and non-steroid anti-inflammatory drugs (NSAIDs), which were prescribed for a short period of time.”

“There were no complications of surgery and the patient’s recovery was uneventful. When seen at a follow-up appointment three months after her operation, she said she no longer had any pain in her finger.”

“She was able to return to her hobby – knitting – and almost forget these 40 years of suffering.”

Dr Dziadzko adds: “The origin of a patient’s pain isn’t always clear. However, in a puzzling situation, a multidisciplinary approach involving different specialists, such as anaesthesiologists, radiologists and surgeons, will almost always help find a solution.”

Read More of our special newsletter covering our congress.