> News > Newsletter June 2020: Factors that may explain why COVID is less deadly in Africa
Been read
3,658

I am a Spanish anaesthesiologist, who has lived in Kinshasa (DR Congo) since June 2019, and I work at the Monkole Hospital. Several friends have asked why in Africa there are far fewer cases of sickness and apparent lower risk of death from coronavirus. The answers to these questions have no known scientific evidence yet, but I believe there are several factors that may be involved.

The different behaviour of the COVID-19 pandemic in Europe and Africa is so far clear and striking. Deaths in the United Kingdom, Italy, France and Spain exceed 20,000 cases in each of these countries, while in African countries, such as DR Congo, they have counted 34 cases and in many other neighbouring countries, the data are similar. In my opinion, there are four factors that could explain these differences:

Let us hope that the pandemic in Africa continues like this, limited to a few cases and limited deaths. A scenario here in Africa, like the one that has occurred in Europe, would be “Dantesque”. In Europe, health systems have responded to the greater needs caused by the pandemic. Thus, to the generally adequate initial resources, extraordinary ones have been added; as in the case of critically ill beds that have multiplied by three or four in some countries. The vast majority of African countries have very scarce health systems that do not meet basic health needs. In general, it can be said that “without money, there is no medicine” and the norm is poverty. In DR Congo it is estimated that there are less than 100 ventilators, almost all in the capital. It is clear that many more are needed, but also specialised personnel, doctors and nurses, who know how to use them correctly. In short, it would be necessary to deploy a great international collaboration to minimally face an epidemic of the magnitude of the coronavirus in Europe and the USA. 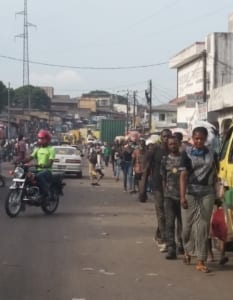 Report from: Matadi Kibala (Kinshasa) in the last week of April 2020

Watch the latest episode of our Webinar Series on COVID-19 exploring best practices to combat the ongoing crisis.

Newsletter June 2021: Editorial - Our congresses. I miss them immensely. You too?

Newsletter June 2021: Clinical corner - The quest for a smooth extubation!