Doctors have reported a highly unusual case of a right-handed patient performing unconscious ‘mirror-writing’ with her left hand while in the midst of having epileptic seizures in the emergency room. The strange case report is presented a this year’s Euroanaesthesia by Dr Laura Freitas and Dr Sofia R. de Valdoleiros, Centro Hospitalar Universitário do Porto, Portugal, and colleagues.

Mirror writing is the script which runs in the opposite direction to normal, with individual letters also reversed, nearly always undertaken with the left hand. It can be seen in healthy individuals or associated with various focal lesions that most commonly involve the left hemisphere. However, it has not yet been described in people with epilepsy.

This new case involved a 42-year-old right-handed female patient, with a form of epilepsy called non-lesional left frontal epilepsy diagnosed at age 18 years. She was being treated with various medications and had needed previous hospitalisations due to seizures requiring coma induction.

On this occasion, she presented to the emergency room of Centro Hospitalar Universitário do Porto with another episode of focal seizures involving her right arm.  Infectious and metabolic causes were excluded, and despite the administration of diazepam 40mg IV and levetiracetam 1500mg IV to help sedate her, the seizures continued.

Between seizures, the patient presented with an episode of mirror writing (see below) with her left hand. The writing said (in Portuguese) ‘”My head can’t take it anymore I need You to stop my head it doesn’t stop”. General anaesthesia and deep sedation were required to bring the seizures under control. 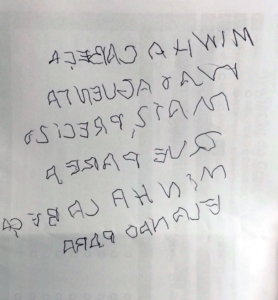 Her relatives, who accompanied her to the hospital, said that she had done mirror writing after previous seizures. When she regained consciousness, the woman had no memory of the mirror writing and is unable to repeat it when not having seizures.

The authors say: “Unaware mirror writing was present in this right-handed patient with epilepsy affecting the right upper limb. Stroke patients with right-sided partial paralysis can rarely present with spontaneous mirror writing, using the left hand. We hypothesise that our patient while feeling impaired to write normally with her right hand during seizures, attempts to do so with her left hand, and mirror writing occurs.” They add: “To the best of our knowledge, this is the first case of mirror writing reported in a patient with epilepsy. Physicians should be aware of this condition, which may be underreported.”

For the image of the mirror writing, click here

For the full paper in Spanish in Neurología, click here